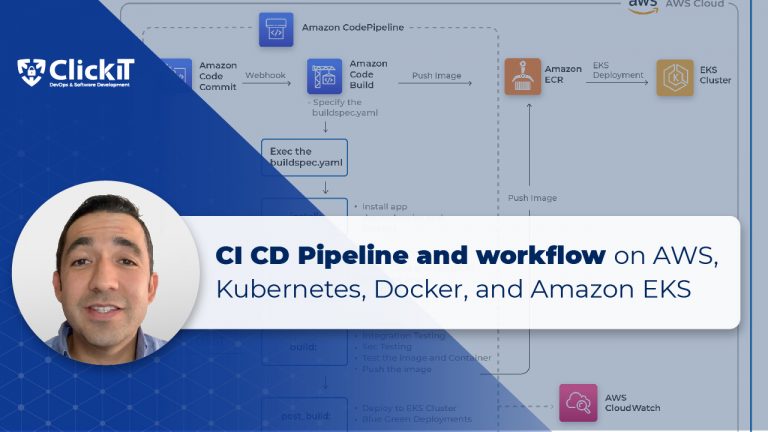 Let’s take look at CI CD Pipeline on AWS. Now you have run the application, or you have scaled your application into a multi environment having dozens of microservices, a Kubernetes cluster, an API, back-end server, just a sophisticated ecosystem for your SaaS application. Plus, you might have a web development team distributed in Mexico, US, Asia.
How are you going to make synergy across all these assets, the environments without errors, no downtime and with high quality?. And for that, you need a solution which is deploy a CI CD Pipeline.

Check out our CI CD Pipeline and workflow on AWS, Kubernetes, Docker and Amazon EKS video

The CI CD stack that we are going to cover are Amazon CodePipeline, Amazon CodeCommit, Amazon CodeBuild, DevSecOps, Kubernetes with Amazon EKS, Docker and a Java application.

To give you some context in CI CD pipeline architecture we have Kubernetes, we’ll be using a microservice architecture with Docker and Amazon EKS. But before beginning with the developer journey, how all this CI CD is a structure or goes across this architecture?.
Well, I would like to explain the difference between all these three services.
If we begin with Amazon CodePipeline, which is the CI CD tool or orchestrator from Amazon to automate the step for releasing software and it’s composed on Amazon CodeCommit and Amazon CodeBuild which in the left side we have CodeCommit and it’s a source control system similar to GitHub, Bitbucket, GitLab, etc. It’s just a regular git repository, but it gives you scalability, redundancy and it’s and is a managed service from Amazon.

Then in the right side of this service, which is Amazon CodeBuild, obviously it helps you create bills, create artifacts and build the code that you might have in your repo, containers, etc.

So now that you’re ready to build your code, your image, you need to execute the buildspec.yml, which it’s in the deployment manifest coming from the CodeCommit source repository and this file has a few steps as you can notice. It begins with the install step which obviously you can here install any dependencies, frameworks, libraries.
For example, if you are using Python, you could specify the version and framework of Python, which in this case would be the jungle, or in our case, is a Java application. Well, you might specify a JJK framework and a library.

After that, you jump to the next step which is the prebuild, usually before building, before building the image.
It’s a good practice in fintech application, banking, healthcare, that you could run at a static code analysis CSA from Vera code or Snyk.
Then we are using DevSecOps when you are embedding your security in a CI CD pipeline. After getting a successful analysis from the security side in this step, well, you can now build the image.

So the last stage, which is the post-build process. Well, after all these steps, if you got success in all of them, from checking dependencies, running security testing in CI CD pipeline, build an image, testing the image and the container which is in the image, well, now it’s time to update the Kubernetes cluster.
So is time, in this case, to run a few steps to deploy or update the EKS cluster. Either using deployment or rolling updates deployment.
So just don’t forget that if you have any trouble on these stages, you could use the hand of Amazon Cloudwatch, which you can review the locks or troubleshoot any bill or contain deployment.

And lastly, don’t forget that EKS clusters need to be updated with the latest container image previously cooked. Also, something to remember that these procedures can be done using other tools like Jenkins, Gitlab, CircleCI, it doesn’t matter, the process is similar, just what it changes is the tool, the cloud native tools to agnostic tools of what I just described it.

And if you need a hand, just give us a call, our nearshore DevOps engineers have done several times, we are experts supporting this type of pipeline, so don’t hesitate to contact us.

So, any thoughts, this CI CD pipeline architecture should give you a great start on how to create an enterprise CI CD pipeline using Kubernetes, Docker, AWS CodePipeline and the AWS cloud native tools.

Now, to find out more about how ClickIT helps SaaS Enterprises run and develop DevOps practices in the cloud or just curious about hiring a nearshore Software Developer in your same timezone, please check out our website at clickittech.com.

What does CI CD mean?

CI/CD, which stands for Continuous Integration and Continuous Delivery is the ability to automate the integration of a project that helps us achieve speed and agility of release.

What are CI/CD Tools ?


Some technologies that you can use for your CI/CD pipeline are:
-ECS (Docker): Caas (Container-as-a-Service) to control all your containers within a cluster.
-Codedeploy: Used to deploy code and perform a series of steps on your EC2 instances.
-Jenkins/Travis/CircleCI/Codeship: To perform the integration and testing of your application and send it either to a CD tool.
-ElasticBeanstalk: It is a platform that many people use to deploy and manage their applications within the AWS dashboard.

What is pipeline in IT?


CI-CD Pipeline can automate the integration of a project, code, or program. Here you can perform module installation, functionality testing, make changes, or deploy quick fixes into productive environments without disrupting the service.

What is GitLab CI CD?


Gitlab comes with a built-in CI/CD feature that helps you quickly set up CI/CD pipelines; Gitlab is open-source code management and CI/CD tool. It enables organizations to collaborate seamlessly with team members working on all project-related tasks such as project planning, code repository management, monitoring, and security.


As a set of instructions to automate the process of Software tests, builds, and deployments, CI-CD Pipeline offers a few elements that make an excellent implementation in your organization.
Smaller Code Change: helps developers recognize any potential problem before too much work is completed.
Faster Delivery:  multiple daily releases or continual releases can be made a reality.
Observability: Having automation in place that generates extensive logs in each stage of the development process helps understand if something goes wrong.
Easier Rollbacks: One of the most significant elements that make CI CD Pipelines good is that you can quickly and easily roll back to the previous working release.
Reduce Costs: Having automation for repetitive tasks frees up the Developer and Operation guys’ time on Product Development.